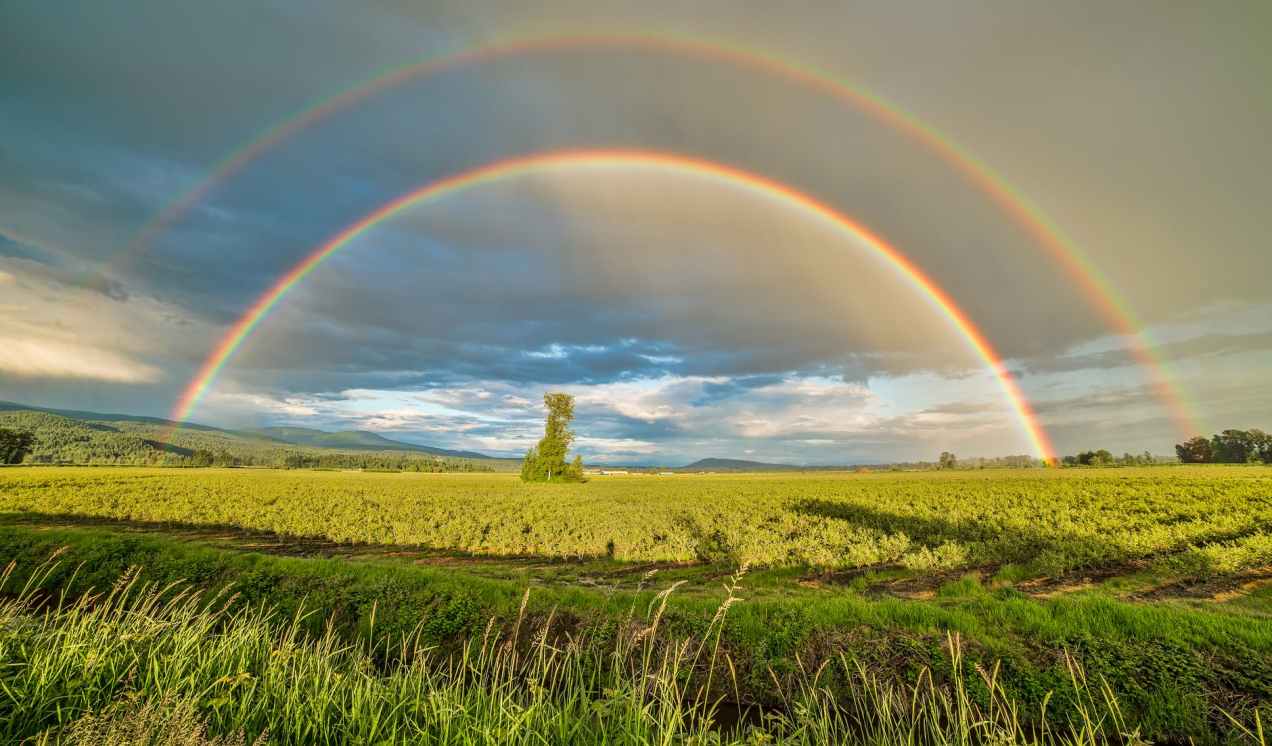 Immediately I was in the Spirit; and behold, a throne was standing in heaven, and One sitting on the throne. And He who was sitting was like a jasper stone and a sardius in appearance; and there was a rainbow around the throne, like an emerald in appearance.   (Rev 4:2-3 NASB)

Did you know God owns the rainbow?  He does.  The rainbow belongs to the Living God.  The rainbow is the sign of His promise.  A rainbow surrounds the throne of Heaven, too.

It doesn’t take an act of blinding insight to notice that the world is messed up.  The world is messed up because of the sin that lives in all of humanity.  Humans get plenty of help from the fallen ones, but they rarely have to do little more than nudge us to get us to sin willingly and revel in our disobedience.

We mistake our freedom for liberty.  We sinners don’t realize we have neither.

What has this got to do with rainbows?  Simple, like everything else unregenerate man touches, we have turned God’s rainbow, His promise, into a vulgar thing.  Humans revel and rejoice at the blasphemy they have created in perverting the things of God.

The world does not understand that God will not be mocked, but we also must remember that God is slow to judge and swift to forgive.

Allow me to tell you a story.  It is a true story.  I’ve intentionally changed some details, but not the event’s truth.  This is so certain people will not be identified.

One day, there was a meeting.  In this meeting was a person who brought a treat.  The treat he brought was a cake whose layers were a rainbow.  People already knew what was happening, as this person had recently begun speaking out about how unfair the world treats a small but vocal subset of our culture.

This small but vocal subset is not content until everyone embraces only their viewpoint.  This small but vocal group has hijacked the rainbow, a symbol of God’s promise of grace and mercy, and has turned it into their symbol to glorify their perversions.  After all, what kind of monster hates rainbows?

Attending this meeting was a person known for being very religious.  He wears his religion like a badge of honor, not realizing that his other character traits make his religious claims dubious. (Please refer to my very last blog entry.)

This person, whom I will call Religio, decided he would show everyone how righteous he was.  Religio berated the person for bringing a rainbow cake to this meeting and let everyone know he doesn’t condone what that symbol represents.  Religio’s behavior was so intense that it inspired the Cake Bringer to leave and never return.  Other considerations had already inspired him to leave, but this was the proverbial straw that broke the camel’s back.

Religio made a scene by demonstrating his version of righteousness.  What Religio didn’t know is that this behavior left even the most generous of souls cringing.  It stopped being a matter of right and wrong.  In the light of Religio’s behavior, all hope of demonstrating grace and mercy had flown out the window.

It is our duty, as believers, to stand for what is true.  It is NOT our duty to stand in a manner that defeats our original calling to teach others what Christ has taught us.

The apostle Paul wrote to his student, Timothy this:

“but speaking the truth in love, we are to grow up in all aspects into Him who is the head, even Christ…”

Here is my point.  And this I something I have, in the past, in my ignorance, and in my religious fervor, also done to people I decided were unregenerate sinners.

Instead of speaking the truth of God’s word in an attitude of love, Religio acted like a Pharisee and judged someone already aware of his fallen state.

I had to ask myself, if I were in the same boat as Religio, would I have done the same thing?  The answer is, yes, before I understood what all God has forgiven in me and the profound greatness of His mercy and Grace to someone like me, I would have resorted to the blindness my religion used to bring out in me.

The rainbow belongs to God.  He invented it. It is His.  In time, some say soon; God will rightfully judge all who have perverted His creation.  In the meantime, He, through Jesus Christ, has left us, His children, to be a living testimony of Grace, Love, forgiveness, and Mercy.

The last 5 years of my life have been an exploration of the wilderness.  This is where the truth of my religious hypocrisy was measured against God’s righteousness and holiness.  I learned I fell short.  I also learned of the Grace and Mercy He has shown me in my ignorance.

God drove me deep into the word and used that word to show me how I have fallen short, but also how He will teach me to love and be aware of all the places He has had to forgive me.  In His infinite patience, he took out my religion and, in its place, showed me grace, love, and mercy because of the sacrifice of His son, our Lord, Jesus Christ.

Here is the difference between religion and salvation.  A religious person wields what little he understands of scripture like a bludgeon.  He is more interested in being right than he is in being righteous.

A religious person acts in a manner that betrays what Christ has done for him.

In the words of our Lord, when confronting the Pharisees, Jesus said: “For this reason I say to you, her sins, which are many, have been forgiven, for she loved much; but he who is forgiven little, loves little.” (Luke 7:47 NASB)

This isn’t Jesus saying that some people only need a little forgiveness.  Jesus is saying that self-righteous people have no clue how much forgiveness and grace they need to be saved.  In the religious person’s eyes, he has arrived.  Jesus is pointing out, “No, you haven’t even approached.”

I don’t claim to be very Christ-like.  It has been only 5 years since God has converted me from my religious arrogance to someone who understands how much he has been forgiven.  I am new to the ways of Our Lord Jesus Christ.  I have a long way to go.  This much I have going for me is that I know how far removed I am from being like my Master.  Religious people believe they are serving God and man in their arrogant self-righteousness.  In the end, they believe they are speaking for God.

I didn’t turn from my sin by being beaten up by religious people.  Even though I tried to destroy their faith, I turned from my sin because saved people loved me the same way God had loved them.  They knew what I was about and fervently wanted me to see what Grace and Love looked like. I marveled at their willingness to love me and show me a grace I knew I didn’t deserve.

This has been the subject of my prayer life lately.  That He removes any barriers that stand between me and the lost so that when people look at me, they see Jesus.  I am nowhere near that state, but I am at least aware that I am not.  Religious people aren’t aware of this.

A rainbow was on display at this meeting.  What a golden opportunity to show your understanding of Grace by gently, with the Love of Jesus, bringing the person to an awareness of what the rainbow signifies.

What reveals our true nature isn’t exposed by how well we think we know the Bible; it is revealed by how much of the Word of God we have let the Holy Spirit teach us.

We are commanded to grow to be like Christ.

Satan is the accuser.  His children are too.

Religious people think they are helping God when God hasn’t asked for their help. I have a secret for you.  God doesn’t need you defending Him.  What he needs is for His children to behave in a way that attracts people to Jesus, not chases them away.

Instead of one beggar telling another where he found bread, Religio denied Cake Bearer the opportunity to see what genuine love and grace look like.  Satan didn’t even have to help.  Religio’s self-righteousness did all the work for him.

One thought on “Religious or Redeemed?”